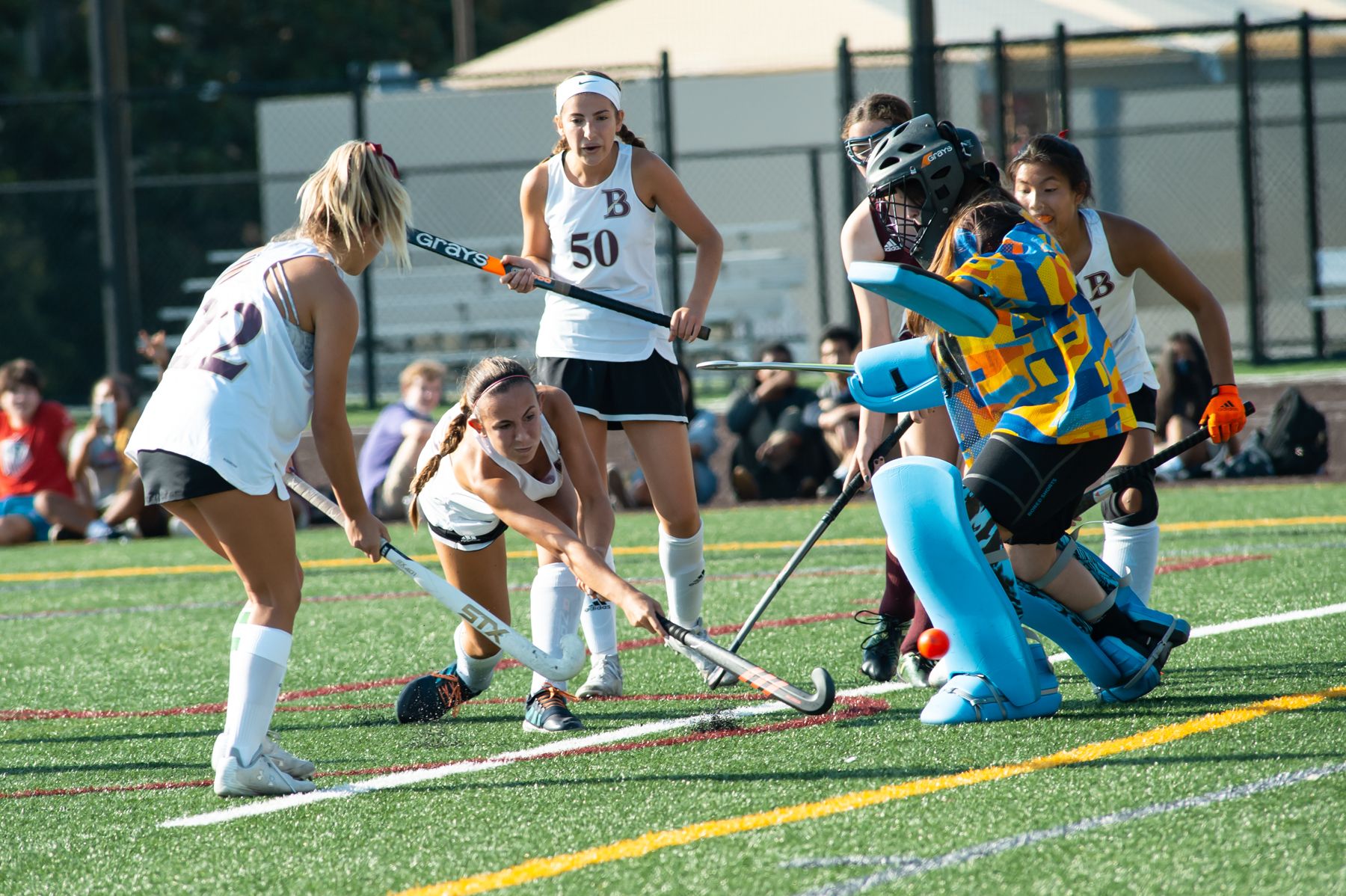 They had their first win over La Jolla Country Day earlier in the week with a 3-0 victory.

Senior goalie Maggie Johnson led early on with a critical save in the first quarter to give us some composure.  Tenth-grader Lily Gover led the team with the first goal. Nicola Xanthopoulos '23 knocked in the second goal late in the third quarter with an assist from Emily Zhu '23.  Kate Peterson '23, Jackie Cosio '22, Bella Myer '22, Sydney Chan '24 and Erika Pfister '23 led the defense and midfield with great connections and got the ball out of the critical scoring area from Country Day. Emily put in our third goal in during the fourth quarter.

In the second game of the week, varsity - with the help of the JV/varsity mix squad - helped start a trio of Bishop's varsity wins that Friday with a 7-0 game against Point Loma.

Leila Feldman '24 scored an all-time high four goals, with the first goal coming off an assist from Lily. Nicola and Mia Gaspar '24 also got a goal each. Sophomore Novalyne Petreikis led the defense by refusing the ball below the 25-yard line, as Macy Haro '23 stepped in as goalie. Senior Maddie Keck helped seal the deal in the last minute with a great assist to freshman Lilian Franqui.

Both wins came with some great leadership from our senior captains Maddie, Bella and Yasmin Henderson.

The JV team is still undefeated with a tie 0-0 against LJCD last week. 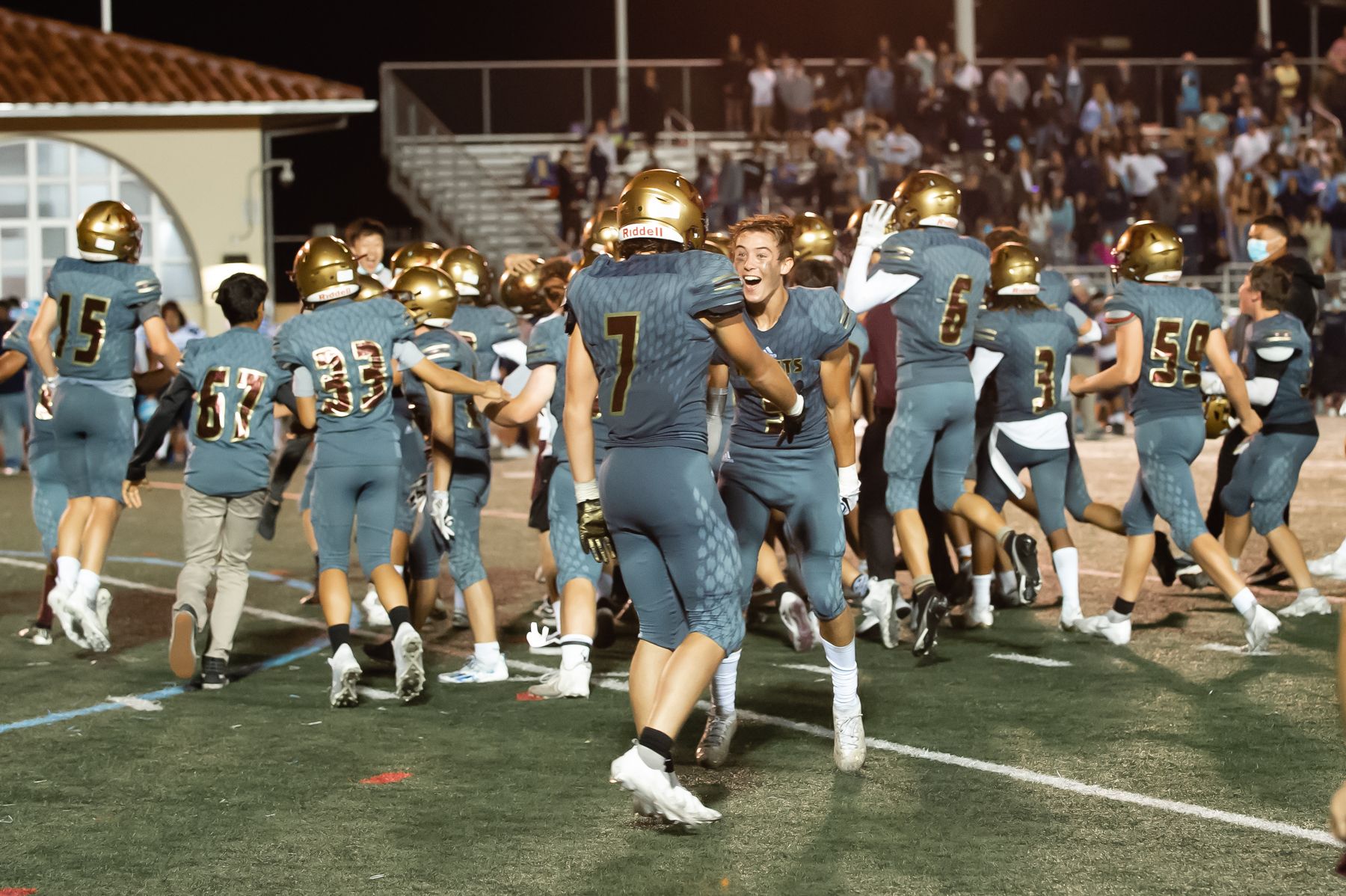 In one of the more exciting football games in recent memory, the Knights took down the University City Centurions on Friday night.

After a disastrous first drive that resulted in a turnover and a consequent score by UC, the Knights answered with a Will Cluskey '24 field goal and a 35-yard TD pass from Will Fierro '23 to Jaden Moore '23.

After a 12-10 deficit heading into halftime, the defense stood tall in the second half, only allowing UC's top-ranked offense to score six points the remainder of the game.

With less than a minute on the clock in the fourth quarter, a long catch and run by Xavier Rodriguez '23 put Will and the kicking unit back on the field. Will put the ball through the uprights as time expired to send the Knights home winners, 20-18!

The Knights football team now sits at 3-1 on the year and takes on Classical Academy this Saturday at 6 p.m. at La Jolla High.

We started the season Sept. 7 against Patrick Henry and came away with a 13-5 victory!

In the first round, our starting freshman won, helping us to a 4-2 lead. Carley Chen won all three of her matches, dropping only one game. The match was dominated by our singles performances, taking all nine sets. The closest match was Angelina Kim '25 against Patrick Henry’s No. 2, and she was able to hold onto the set 7-6(4). Doubles was a much more even affair, with us winning four of the nine sets. Great performances came from Claire Zhao '22 and Kylie Larson '24, who won two of three sets against the number two and three teams. Overall, it was a good team effort for the first match of the season.

We did not have to wait long before our next match. Playing the next day at home against Westview, we took our first loss, 12-6. Our number-one player Carley continued her strong start, winning all three sets and only dropping one game. Our three other sets came from our number-one doubles team of Claire and Kylie. They beat the No. 1 team 6-4, the No. 2 team 6-2, and the No. 3 team 6-1. Our other sets were in favor of Westview.

To round out our first week, we played OLP on Thursday, and it turned out to be a well-contested match for an 11-7 win. After the first round, we led 4-2 with tight sets wins. Paulina Ai '24 won 7-5 at line 2 and Audrey Faber '25 won 6-4 at line 3. We split the second round, taking two out of three singles and only one doubles match. The final round singles continued with Carley and Paulina winning convincingly 6-0,6-1. In doubles, seniors Clare Malhotra and Mira Gowda got their first win of the day 6-2 against OLP’s number three team.

This coming week, we're ranked No. 6 and face two teams also ranked in the top eight: No. 4 Del Norte on Wednesday and No. 2 Torrey Pines on Thursday. This gives our players a good opportunity to challenge themselves.

Matsa Shi '24, Ashley Sottosanti '22 and Audrey An '23 had gritty performances on defense while combining for 10 kills.

The Knights will be playing in the Coastal Classic Volleyball tournament this weekend at Bishop’s and La Jolla High School. Admission for this tournament is $10 for adults and $5 for students. 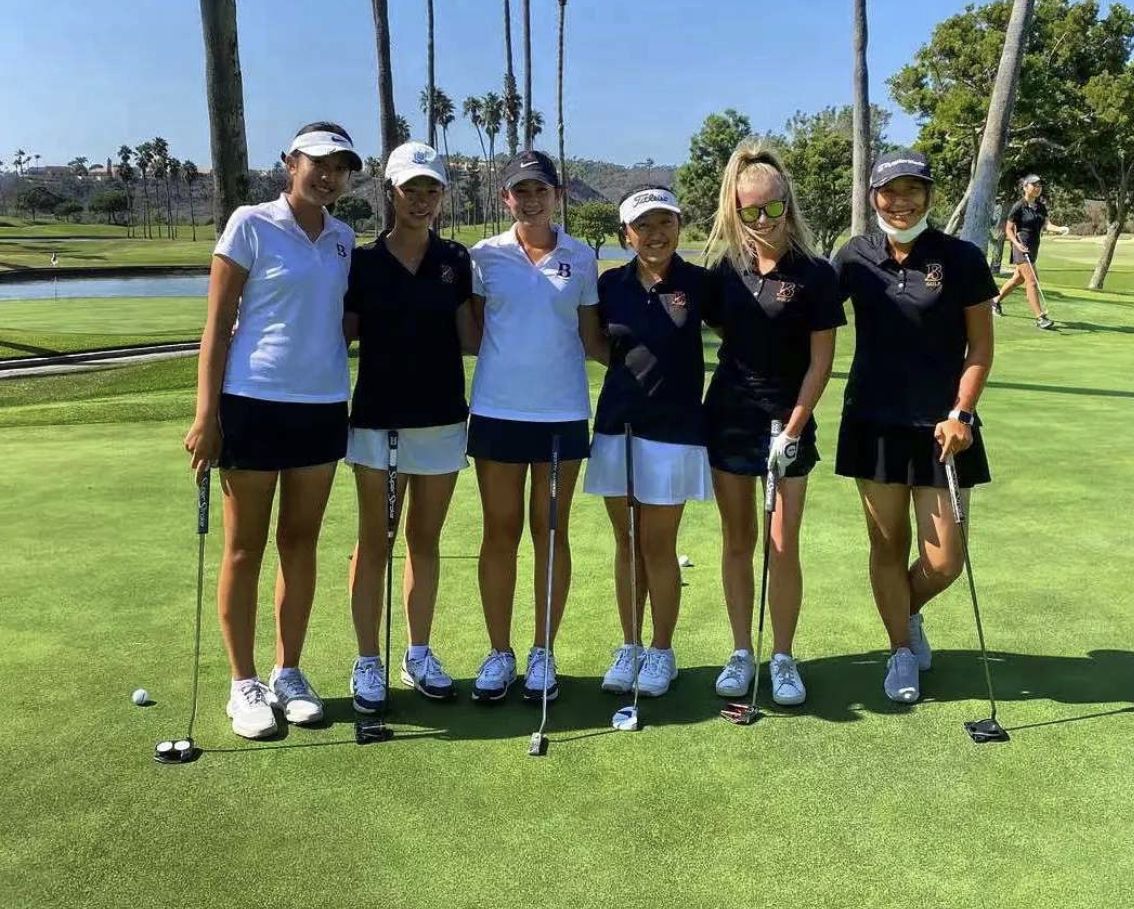