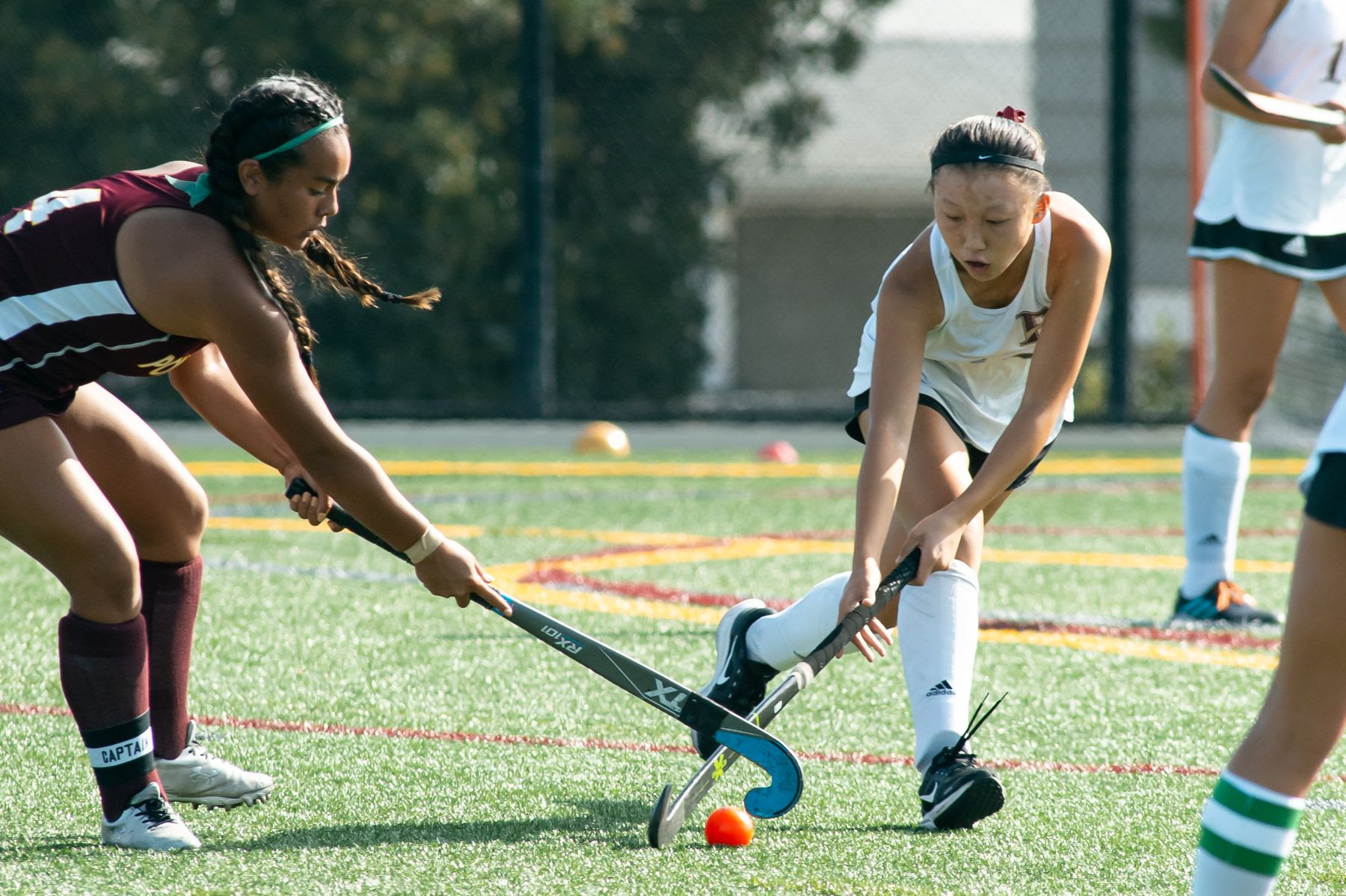 Last week, JV Field Hockey came back to beat LJCDS 5-0 after tying them 0-0 the week before.  Ninth-grader Safina Abraham knocked in her first two goals of the season. Reagan Kilber '24 then scored her first goal of the year. Both Gabby Gaspar '25 and Laine Jeffery '25 scored off an assist from Natalie Marvin '25.

Varsity followed up the next day with a 6-0 shutout over Clairemont. Erika Pfister '23 and Leila Feldman '24 both scored, with one of the goals assisted by Emily Zhu '23. Nicola Xanthopoulos '23 and Lilian Franqui '25 followed up with a goal each. Bella Myer '22 helped control the midfield and defense with senior goalkeeper Maggie Johnson coming out to clear some one-on-one shots.

This weekend, Varsity participates at the Helix Tournament. 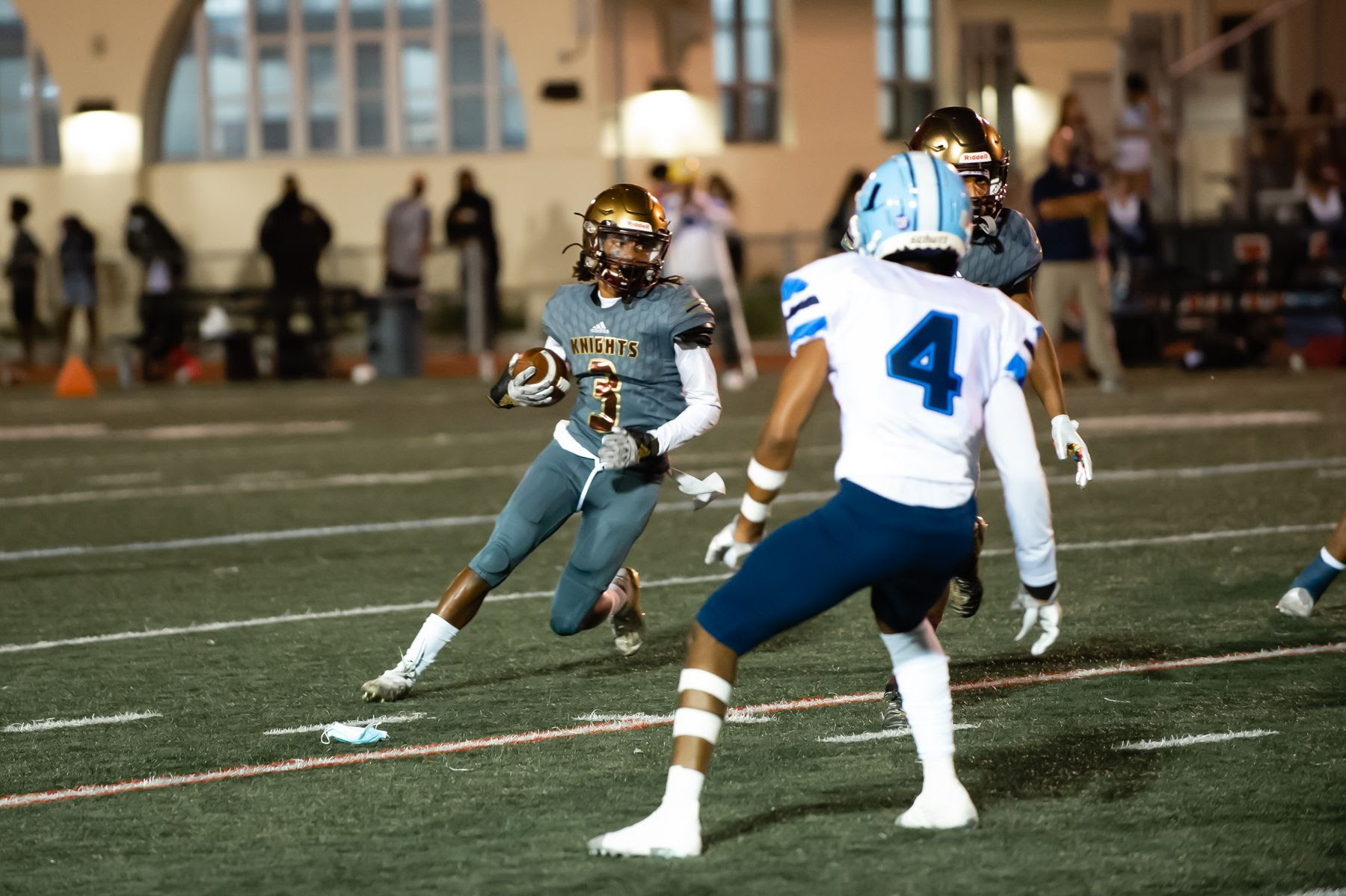 After a sluggish start which saw the Knights trailing 28-27 going into the fourth quarter, both sides of the ball stepped up to put up 34 unanswered points and a shutout on the defensive side.

Varsity has this week off, as they prepare to take on the tough league opponent Santa Fe Christian on Saturday, Oct. 2 at noon. The Knights' freshman team plays Del Norte Saturday, Sept. 25 at 5 p.m.

Girls' Volleyball (15-4) was perfect heading into the final match, winning the previous 12 matches in a row. The Knights faced off against Huntington Beach in the Gold Division Final but lost 2-0.

Co-captain Brynne Faltinsky '22 and the Knights have been playing great volleyball to start the season. Brynne finished the tournament with 51 kills and 7 aces. Kaia Grieve '24 and co-captain Annecy Crockett '22 had 27 and 26 kills respectively.

Sophomore setter Nalani Muniz did an amazing job connecting with her teammates, finishing with 240 assists.

Ashley Sottosanti '22 had five blocks and Sydney Bold '23 ended the tournament with 47 digs.

The Knights return to Coastal League action at La Jolla Country Day on Thursday at 5 p.m. 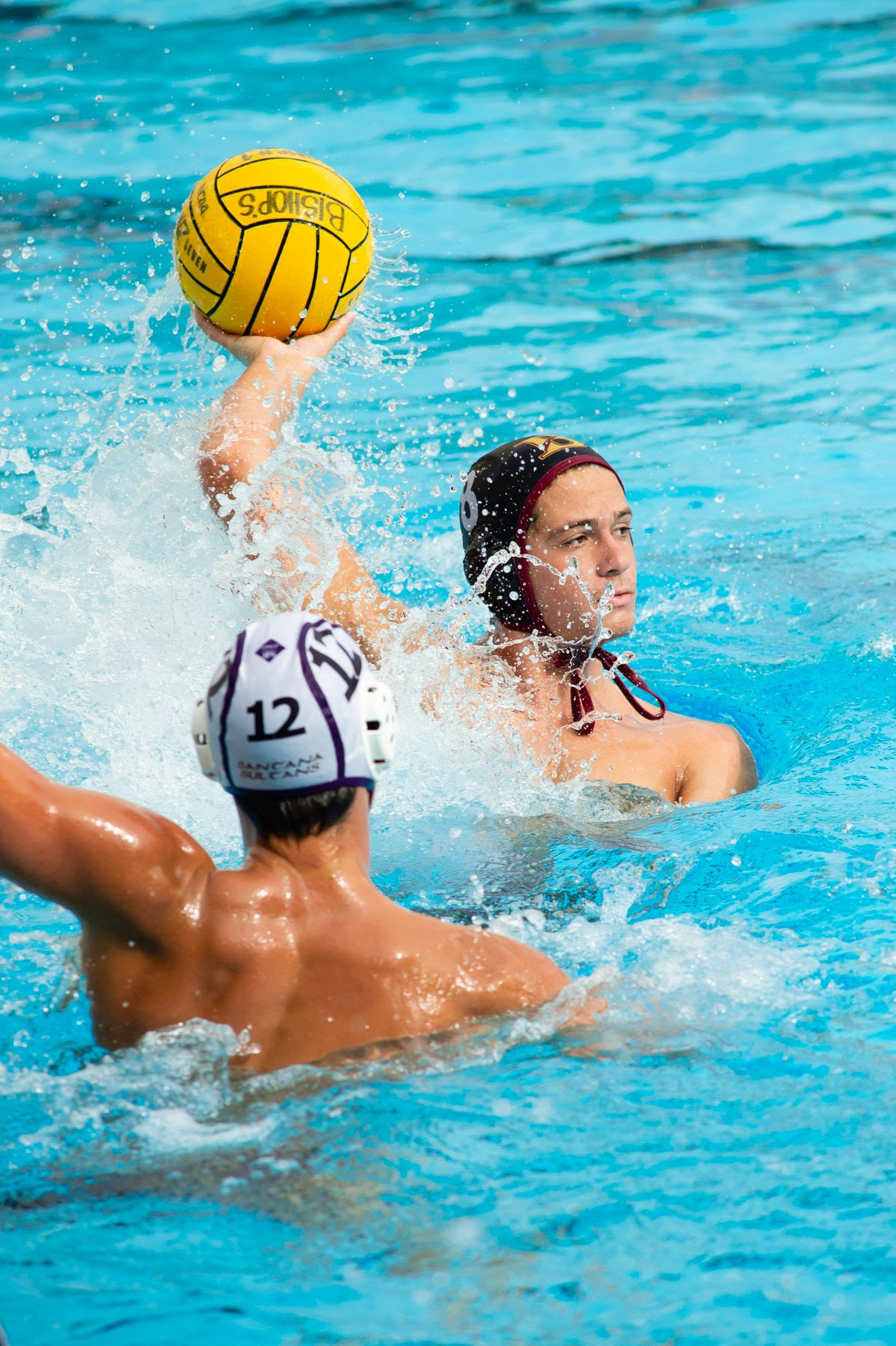 All 15 players who went to the tournament saw action against Costa Mesa, which Bishop’s defeated, 21-2. The Knights were led by freshman Charlie Martin with four goals. Nine other players also scored one or more goals.

In the second game of the evening, the boys lost a tough match to Laguna Beach, 12-10. The team was led by Garrett Johnson ’22 and Chase Landa ’23 with three goals each. Justin Stone ’24 scored twice and Mark Stone ’22 and Max Stone ’22 each had one. Lukas Peabody ’24 dished out six assists. Oliver Price ’23 was strong in the cage with seven saves.

Coming back up on Friday night, the boys took on Los Alamitos. The game started out rough as the Knights dug themselves a 7-2 hole halfway through the second quarter. A fiery halftime speech got them going and by the end of the third quarter the game was tied 7-7. The score was 10-10 at the end of the fourth quarter on an incredible last-ditch timeout play, where Alex Goldman ’23 got the ball to Chase, who scored the tying goal with seven seconds left. This game went into golden goal and on the third possession, Garrett got the ball to Chase for the game-winner. The team was led by Mark, Max and Chase, who scored three goals apiece. Garrett and Lukas rounded out the scoring with one goal each. Oliver and Jaxon Leach ’24 combined for 12 saves.

Back at it again Saturday morning, the boys pulled off a 6-5 win against Northern California powerhouse Campo Lindo HS. The team was led by their goalie play; Oliver made nine saves and Jaxon had six saves. Five different players scored the Knights’ six goals: Garrett with two, and Mark, Chase, Lukas and Justin with one goal each.

The last game of the tournament for ninth place was played against Loyola HS. It was another close one, but the Knights pulled off an 11-10 win. The team got a great game from Mark, who shot four-for-five on the day, including the game-winning goal assisted by younger brother Justin. A trio of juniors came up large, with Chase scoring two and Alex and Ryan Arrowsmith each netting one. Max and Garrett chipped in two goals and a goal respectively. The team was backstopped by Oliver with three saves in the first quarter and Jaxon with six saves the rest of the way.

The coaching staff is incredibly proud of the boys’ three-day effort, going 4-1 for the weekend!

Varsity Girls’ Tennis won both of its matches last week, beginning with a match on Wednesday at Del Norte.

We had a tough start, falling behind 5-1 after the first round. Our only win 6-2 came from Carley Chen ’25 against their number one. In the second round, we picked up two more sets with Carley winning her second 6-0 and Kylie Larson ’24 and Claire Zhao ’22 winning 6-1. The team score at that point was 9-3 and for us to win, we would need to win all the remaining matches without dropping too many games. As it turned out, we only won three sets but there was improvement at each line. Audrey Faber ’25 won at line 3 singles 6-2, Annalise Chang ’23 and Paulina Ai ’24 won 6-4 against their line 3 team, and Claire and Kylie beat the line two team 6-3. The overall team score was 12-6.

On Thursday, we hosted Torrey Pines and got off to a good start, sweeping all three doubles matches. Claire and Kylie won 6-2, Clare Malhotra '22 and Annalise won 6-4, and frosh Angelina Kim and Madeline Luscomb won a close set 7-5. In singles, Carley won quickly 6-0 against their number one. After the first round, we led 4-2. We split the second round three sets apiece, as we took two out of three doubles sets and Torrey Pines took two out of three singles sets. The notable wins came again from Carley in singles, and Claire and Kylie. Entering the third round, we led 7-5 and needed three sets or two sets and a high number of games to win outright. We quickly reached our eighth set with Carley winning 6-2, but they answered back with a win at line two singles and three doubles for an 8-7 score. Claire and Kylie then secured our ninth set 6-1 against their line three. We now had to win one of the next two sets to win out right or winning as many games as possible. Audrey put up a good fight against their line two player but lost 6-4. In the last match for the win, Clare and Annalise ended up going into a tiebreak, but eventually lost the match 10-8. This tied the match on sets 9-9 but with all the different games players picked up, we won 76-73. This takes our team record to 3-2.

We open league play on Sept. 28 with a home match Francis Parker.

Meanwhile, Junior Varsity posted an impressive 11-7 win over Torrey Pines on their courts this past week.

JV Girls' Tennis is currently 2-2 on the year and will face Del Norte this Wednesday at home. Cross Country competed in their first meet of the season at Morley Field this Saturday. The girls' course was 2.75 miles of grass, dirt and one big hill, while the boys raced 2.95 miles over two big hills.

Senior Maddie Cramer continued to impress; she maintained a steady seventh place throughout the grueling course and then turned on her sprint speed in the last 50 meters to chase down La Costa Canyon and pass her with 10 meters to go! Maddie finished the course in a blazing 16:29 to place sixth. Other girls who medaled were Nancy Waldman (20:58, 44th in the junior race) and Anna Krolik (22:05, 44th in the freshman race).