Watch the recording of Transition to Upper School Athletics on April 28, 2022 here, and review the slides here.

The Bishop's Athletics Department invites all upper school athletes and parents/guardians to the first annual BESPYS awards celebrating our upper school varsity athletes. Think the ESPYS with Bishop's flair. The maroon carpet rolls out May 31 from 5 - 7:30 p.m. on campus. Light refreshments. A-game attire. 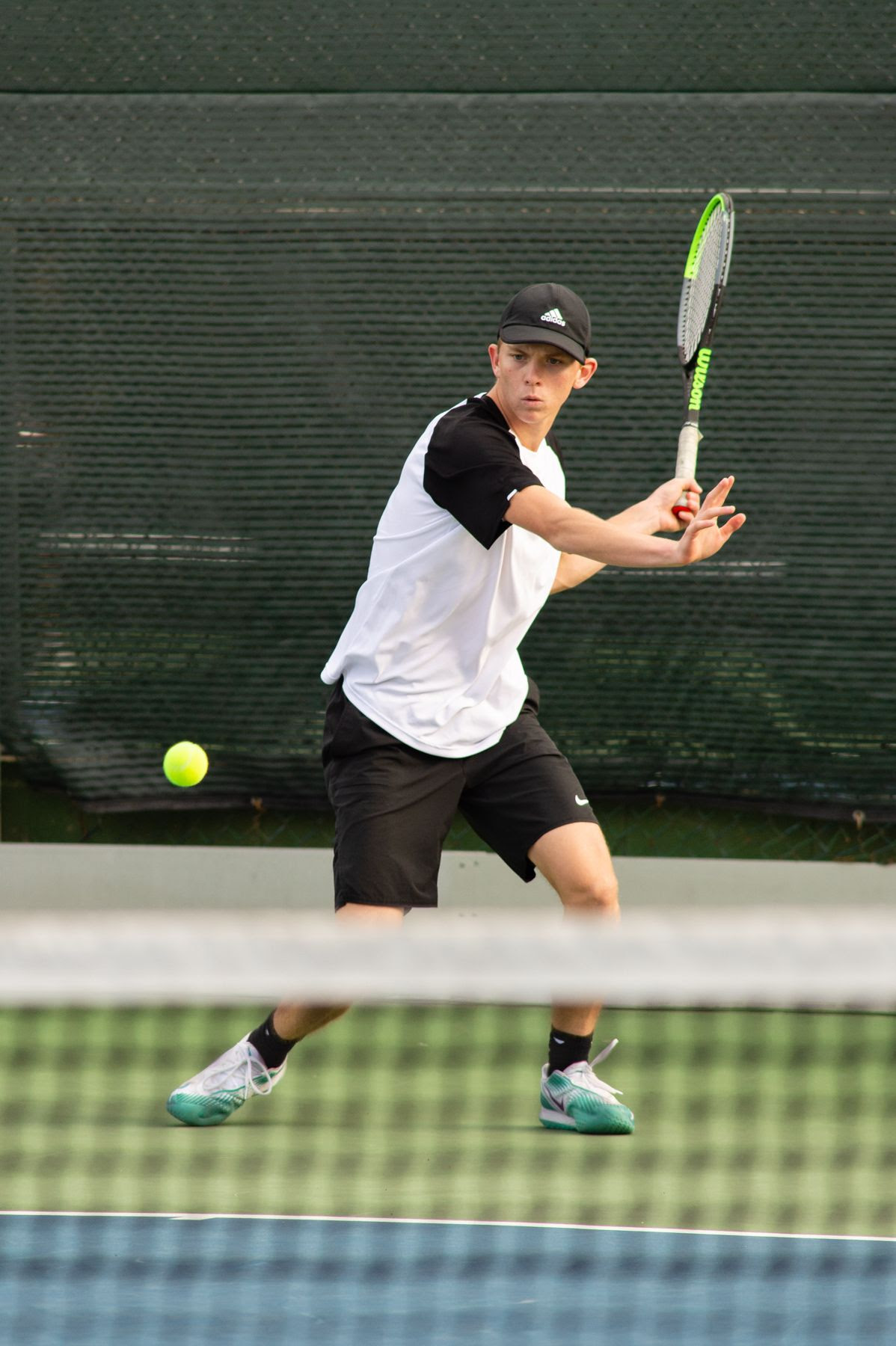 We started out the week as the top seed, so we had a home match against La Jolla High for the quarterfinals. We played a strong match, winning 14-4. In singles, Rex Harrison '23 and Tyler Li '24 won all three of their sets without dropping a game. In doubles, we won six out of nine sets, but were unable to beat their strong number-one team in any sets. It was a good team performance where all the players had a chance to contribute.

In the semifinals, we faced Torrey Pines for the second time this season.

Earlier in the year, they got the better of us, 10-8. But on this day, our team came out firing and after the first round, we had a 5-1 lead. Rex beat their number one 6-3 and all our doubles teams won with the closest set being 6-3 from Carlton Schell '24 and Alex Balog '24 against their number one team. After the second round, we had won the match. We won all six sets, sweeping singles and doubles. The most notable wins were Tyler beating their number one 6-4, and Nicholas Liu '22 and Eddie Qiao '23 won 6-3 over their number one doubles team. Entering the final round, the team score was 11-1 so I subbed in three new singles players. The best performance came from Jasper Jain '23, winning 6-1 against one of Torrey Pines' subbed-in players. We went on to sweep the last round of doubles, taking all nine sets for the match. The final team score was 15-3 and this was my first victory over Torrey Pines since I took over coaching at Bishop's in 2010!

In the finals, we faced off against CCA for the second time this season. We won the earlier match, but this match turned out to be much tougher.

After the first round we trailed 4-2; we lost a tight match at line three doubles but we had good wins from Rex in singles, and Aden Dorros '23 and Matthew Carioscia '25 at line two doubles. In the second round, we quickly found ourselves down 6-2, losing two sets when their number one singles and doubles teams beat our number threes. Tyler secured a set for us, beating their number three, and Aden and Matthew beat their number three doubles team to bring the match back to 6-4 with two sets left. Carlton and Alex then lost a tight match to their number two doubles team 6-4. But the most dramatic match came with Rex losing to their best player 7-6(4). He came back from 5-2 down and saved match points at 6-5, before having a 4-3 lead in the tiebreak denied by some great play by his opponent to lose 7-4.

In the final round, doubles had started earlier and CCA won two quick sets to secure the victory. But the singles started their rotation so CCA subbed in three seniors, and we made three changes to give our team some more experience. Jasper won again after being subbed in with a strong performance 6-4. The last doubles match was very contested, and Alex and Carlton managed to hold on 7-6(8) to make the final team score 12-6 in CCA's favor.

We had a great season but came up a little short. On May 20, we represent San Diego at regionals and we look to learn from this finals performance and go further.

Bishop's Swim looks to carry this great momentum to CIF-San Diego Section Championships at Granite Hills High School. The championships are held Thursday, May 5 and Friday, May 6.

Fueled by 4x400-meter relay wins and individual victories, Bishop’s Track and Field competed in the league finals on Thursday, April 28. There were 24 personal records broken and two season-best performances.

Bishop’s begins the road to CIF State Championships as they compete in the conference finals on Thursday, May 5 at University City High School. The winner of each event, as well as anyone who meets CIF qualifying standards, will advance to the CIF prelims next week. Let’s go Knights!

Bishop's scored four runs in the bottom of the sixth inning to beat Parker 10-7 on April 27.

Senior Soyoon Park drove in the winning runs in the sixth inning (3-for-4, three runs, one double, three RBI). 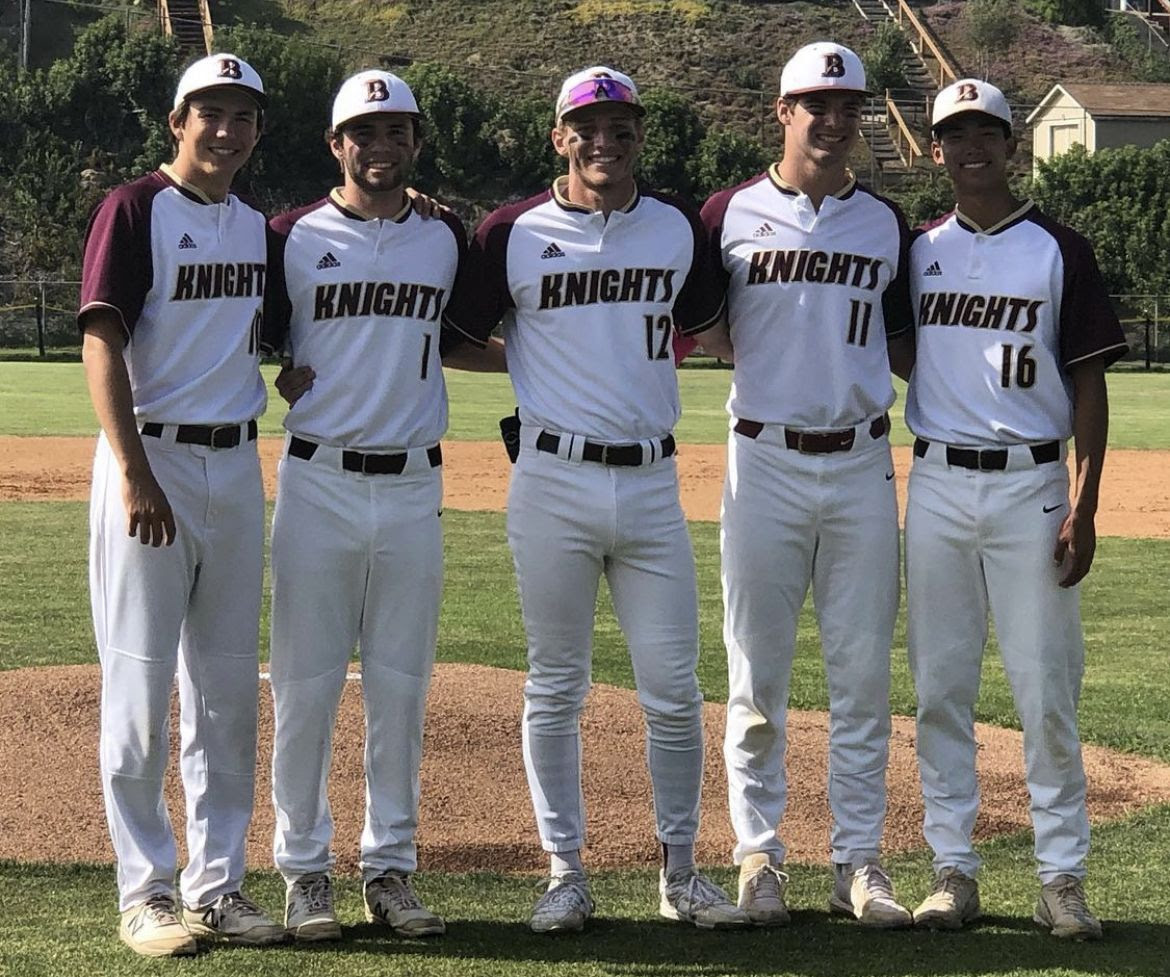 Offensively, the Knights were led by seniors Bode Grieve, who knocked a solo home run, and Rhett Larocca, who hit an RBI double.

It was the finest showing of the year for the Knights defense, who sparkled all day, making no errors and working quickly and efficiently behind Kates. Jack Castagnola '23, Henry Armstrong '25 and Julian Tang '22 also tallied hits for the Knights. 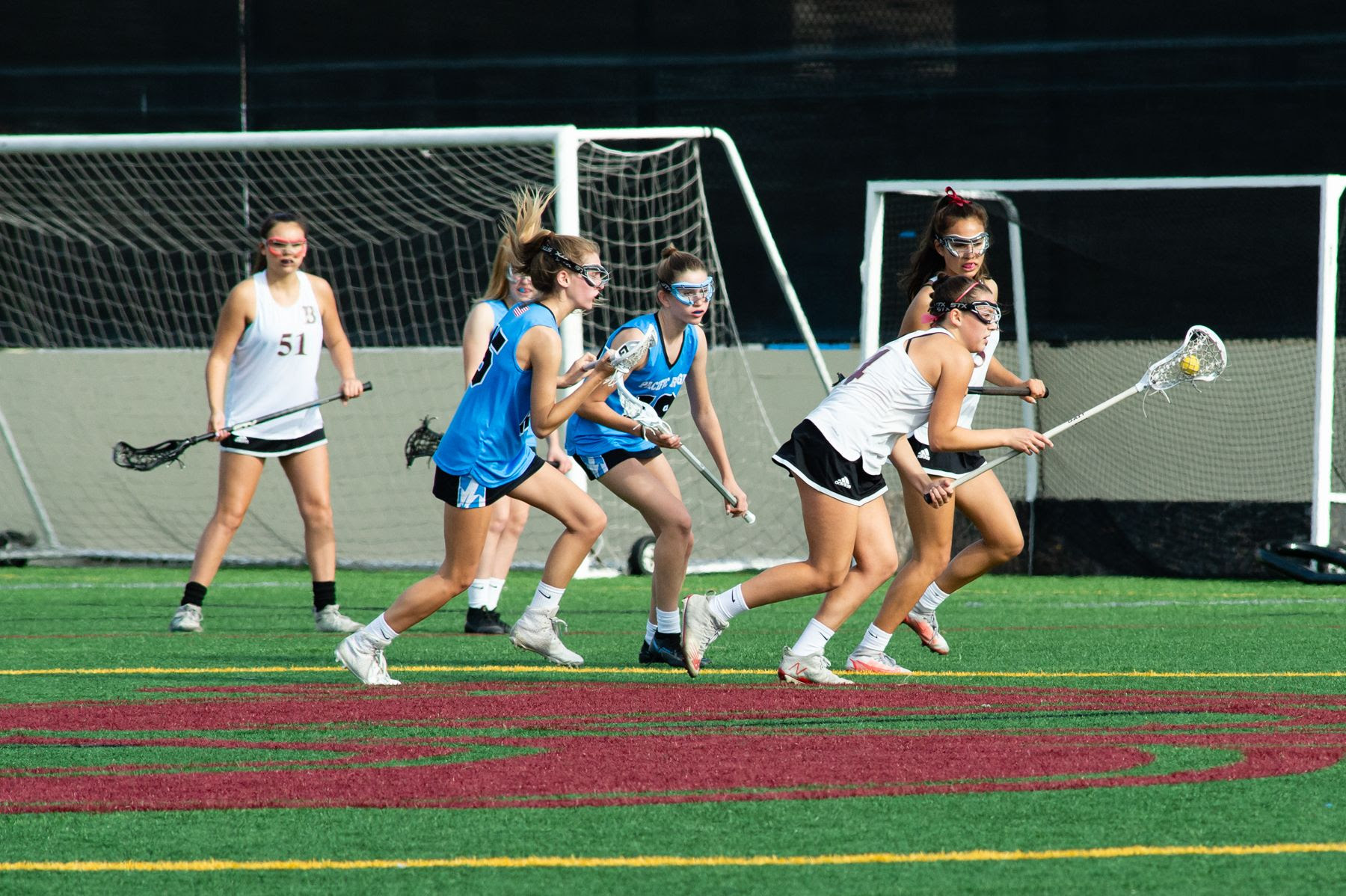 Varsity girls' lacrosse is 12-5 as we head into the last week of regular season play.

Boys' Lacrosse Ranked No. 2 in County

Casey Ryan '23 led the scoring with two goals, followed by Nick Marvin '24 with two goals and Hewitt Watkins '23 with one goal. Eddie McElroy '25 had nine saves in the cage.

The team is currently 17-1 and ranked No. 2 in San Diego County. The final regular season game, our senior night, is a huge rematch against Santa Fe Christian on Thursday, May 5 at 5:30 p.m. Come out and get loud!

Boys' Volleyball Geared Up For The Playoffs 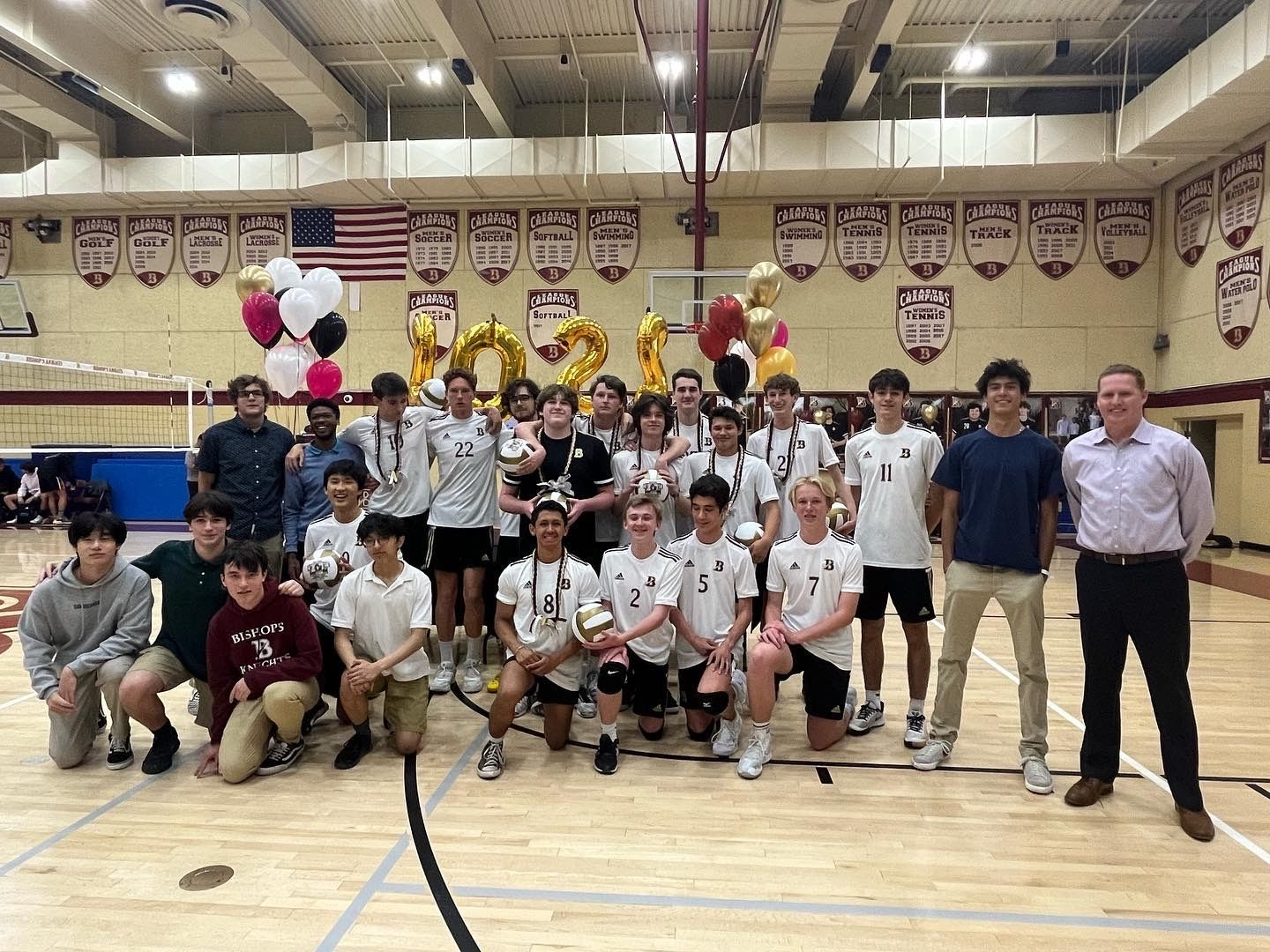 Bishop's Varsity Boys' Volleyball is 9-1 in their last 10 matches and is heating up at the right time. For the opening round, they will face Helix High School.

The theme for the season has been "unfinished business." In 2021, Helix beat the Knights in the second round of Division II playoffs.

"We are thrilled with our draw in the Division I CIF playoffs and can't wait to play Helix," says senior captain Logan Howard. "Our squad has been thinking about this match for over a year. We have some unfinished business to take care of."

Last week, the Knights finished the regular season with a win against Santa Fe Christian.

Before the match, the seniors were honored and all of them appeared in the match. "I have truly enjoyed playing on the boys' volleyball team at Bishop's," says senior captain Ryland Birchmeier. "It is arguably the best experience I have had at this prestigious school."

Congratulations to Bishop’s Boys' Junior Varsity Lacrosse for advancing to the championship game in the JV Roundup Tournament this weekend!

The Knights lost in overtime to Westview.

Silver medal is incredible for a team where half the boys had never even picked up a lacrosse stick before this season! Sohan won the high bar and finished second in the Level 7 Junior division in the all-around and rings.