This summer, Bishop's Athletics is offering our strength and agility program to all enrolled students in grades 6-12. In supporting Bishop's Strategic Plan with a focus on student wellness, the summer program is free to all Bishop's students.

The Knights Strength & Agility Program is designed to help student-athletes grades six through twelve improve their overall athleticism. A series of functional exercises, speed training and conditioning drills are matched together to emphasize strength, speed, agility, flexibility and endurance, benefitting any student regardless of their sport or activity. The program also emphasizes balance, stability, coordination, reaction time and explosive power.

Morning and afternoon sessions will meet for 90 minutes per day, three days per week, in the Coleman Family Health and Fitness Center and on Hunte Fields at the Fowler Athletic Complex on Bishop's campus.

Registration closes on June 1 so we can adequately staff the program. If you have multiple students at Bishop's, please fill out the form separately for each student. Sign ups after June 1 will be put on a waitlist pending available facility space.

Ian has extensive experience with video analysis and will work closely with student-athletes and coaches alike. This addition to the athletic department will enhance the development of players and coaches, and engage our community through social media.

Bishop's College Counseling and Athletic Departments welcome families to join us on campus in the Manchester Board Room or via Zoom for an informational event regarding the NCAA recruiting process for student-athletes. Please join us on April 25 if you or your student is interested in playing college sports. The schedule of the evening is below. Register here. The event is also available on Zoom here.

Bishop's Athletics invites all current eighth grade and new upper school parents and guardians to join Athletic Director Paula Conway for an overview of the transition from middle school to high school sports. The goal is to give families a realistic understanding of the time and scheduling commitments expected of our upper school student-athletes. This event will take place at 8:30 a.m. on April 28 in the Manchester Board Room.

The Bishops Athletics Department invites all Upper School athletes and parents/guardians to the first annual BESPYS awards celebrating our upper school varsity athletes. Think the ESPYS with Bishop's flair. The maroon carpet rolls out May 31 from 5 - 7:30 p.m. on campus. Light refreshments. A-game attire.

Bishop's Varsity Boys' Golf secured another Coastal League championship after defeating Classical Academy at Rancho Bernardo Inn on April 19. The Knights posted their lowest league score of the season, shooting a team total of 189. Kayden Wang '25 had the low round of 2 under par, while William Ma '24, Michael Geng '24, Graham Walker '22 and Aarav Chandra '22 all played excellently in the league title-clinching match. 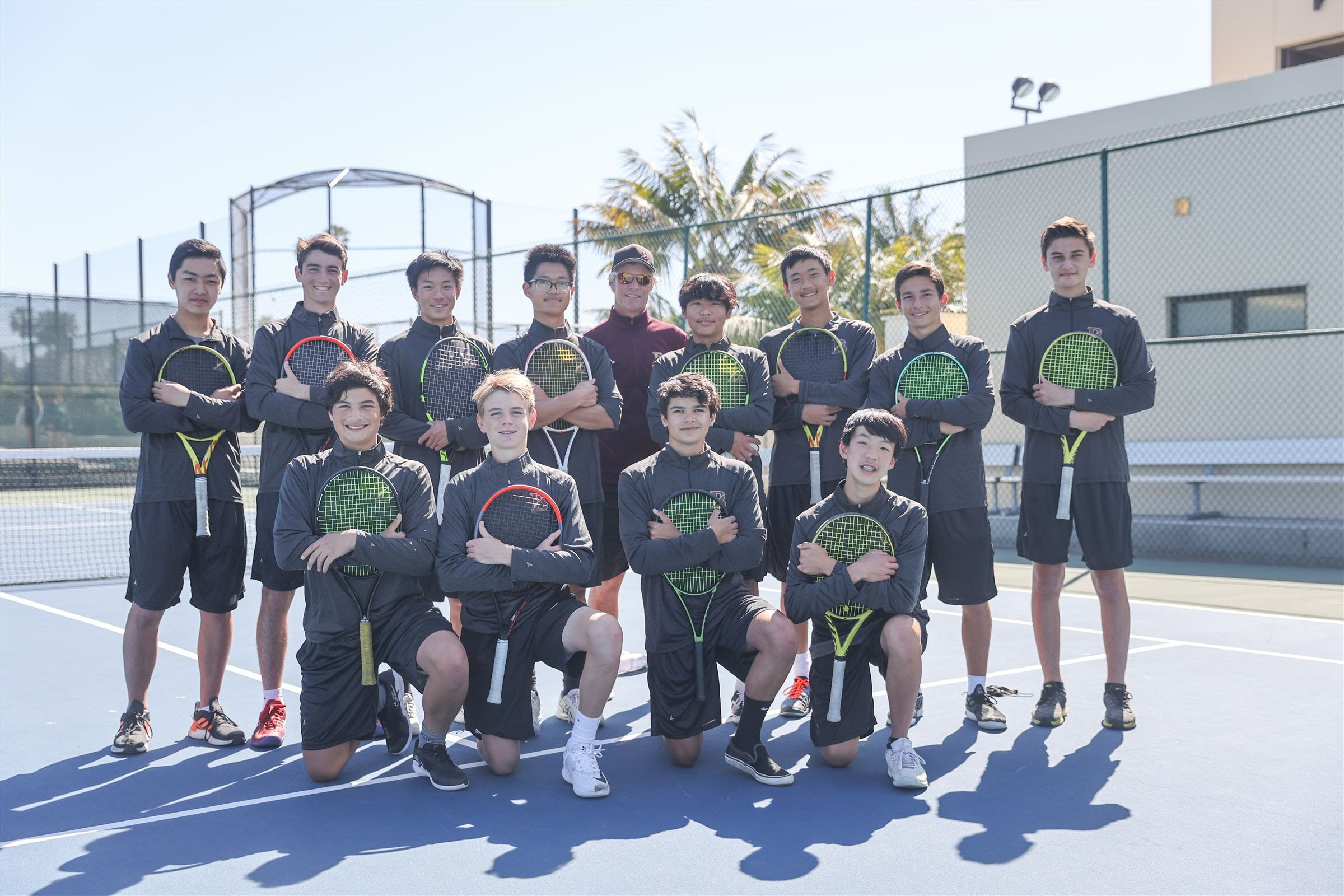 On April 12, Boys' Tennis won the Coastal League title with a tight 10-8 victory over LJCD.

The player of the match was Tyler Li '24, who won all three sets. He beat their number-three 6-1, held on in a very nerve-wracking match 7-6(5) against their number-two singles, and closed out the match by clinching the winning set 6-4 against LJCD’s number-one.

During the second round, our doubles swept, helping the team reach a lead of 8-4. Ryan Qin '25 and Eddie Qiao '23 beat their number-one doubles team 6-3, which proved to be very valuable. In the final round, sophomores Alex Balog and Carlton Schell were the only win in doubles but that was just enough for the victory.

Our final match of the regular season was against crosstown rivals La Jolla High.

We started the match incredibly strong, winning all six sets. The closest match was Ryan and Eddie, taking it in a tie break 9-7. They had trailed in the set the whole time until the very end. By the conclusion of the second round, we had won the the match by securing four more sets. The overall score was 10-2 with doubles wins from Michael Zeng '22 and Merritt Eastman-Pinto '24 6-3, and Alex and Carlton 6-0. Some other notable performances came from Aden Dorros '23, winning all three singles sets 6-1, 6-0, 6-0 and Ben Brown '25, winning two out of three sets 6-3, 0-6, 6-2.

Our overall record for the season was 13-2 and our league record was 6-0. Heading into the playoffs, we are currently ranked second so we're hopeful for a home playoff game starting on April 26. It was been a great season for players showing growth, and we look forward to the postseason!

During spring break, varsity boys' lacrosse faced their biggest test yet against Cathedral Catholic but came out on fire and defeated them by a score of 12-4. The Dons had no idea what hit them. Casey Ryan '23 led the scoring with four goals and two assists, followed by Hewitt Watkins '23 with three goals and Brooks Rodger '24 with two goals and one assist.

The team is currently 13-0 and ranked second in San Diego County. Our next game is Thursday at La Jolla Country Day at 6 p.m. If you want to follow the team’s progress and see how things shake out in the final weeks of the CIF season, go to Lax Numbers. 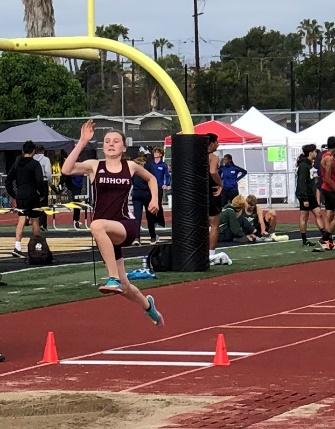 Placing in the top three for scoring in our league meet for the girls: Malaya (first in 200M and second in 400M); Maddie (first in 800M); Lexi (third in 800M); and Emily (third in shot put and third in discus). The 400M relay team of Maddie, Lexi, Malaya and Isabella won.

The next league meet is Thursday, April 21 at Orange Glen. Two ninth-graders - Jacob Cravatt and Malaya Taylor - represent Bishop’s in the highly competitive Frosh/Soph Invitational on Saturday at Del Norte.

Girls' Lacrosse Looks Ahead to Second Half of Season 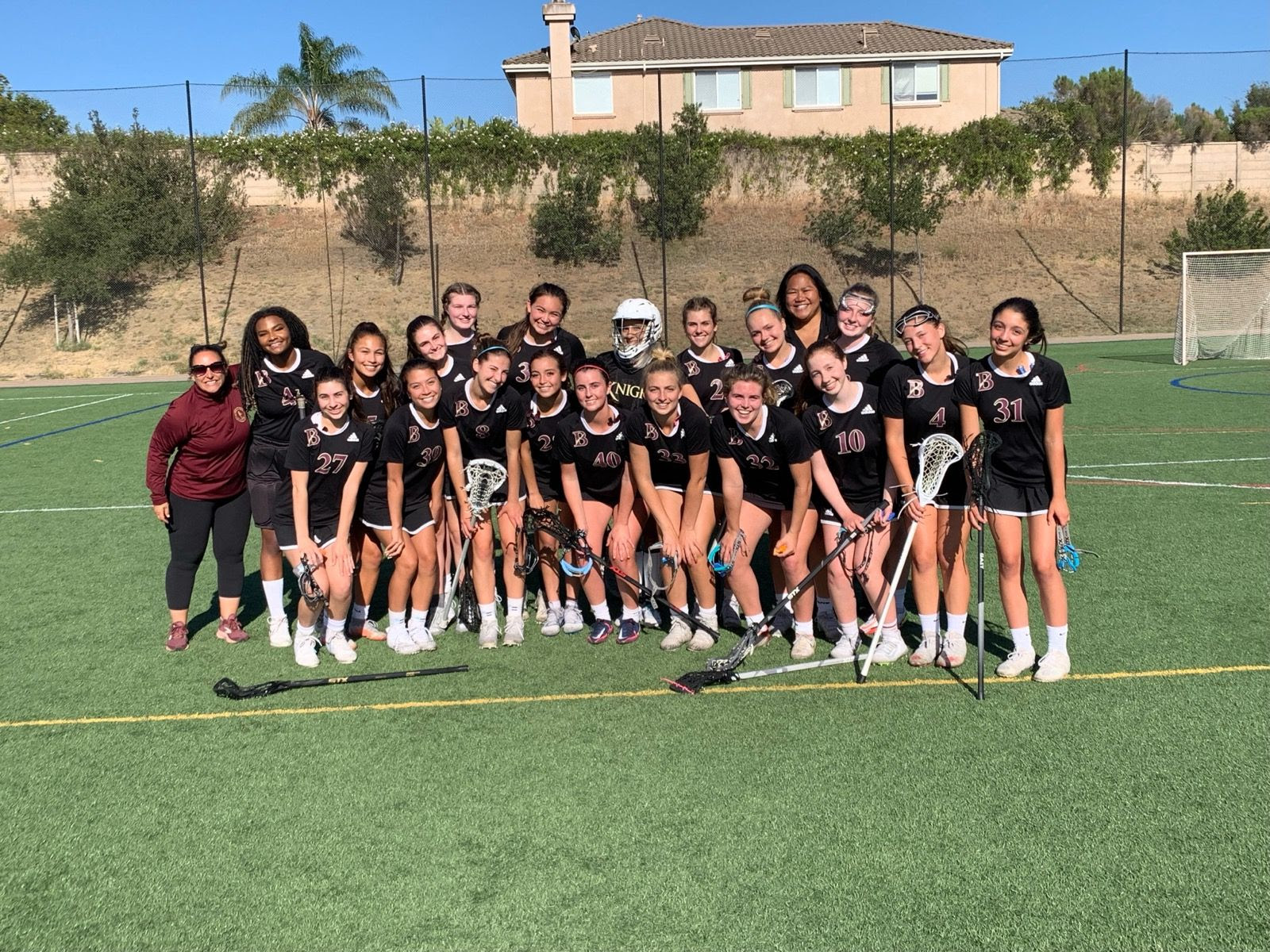 Girls' Lacrosse is 9-4 as they enter the second half of their season.

They took home two wins and a loss this past week and a half. They lost a close game to Patrick Henry last Wednesday by two points. However, they came back the next day to secure a win against Helix 17-10. Erika Pfister '23 averaged six goals in both of those games. Yasmin Henderson '22, Natalie Marvin '25 and Jordyn Mariam '23 came up big in both of those games with two or more goals per game.

The team started this week on the road beating Del Lago 20-4. Defenders Lexi Black '24 and Laine Jeffrey '25 got their first goals of the season with strong feeds from senior Sara Hamadeh. Ninth-graders Alex Pfister and Natalie Marvin had five goals. Another starting defensive player Nicola Xanthaopoulos '23 had two goals. Both goalies, senior Zen Greene and Sofia Verma '24 - had three saves apiece. During the games, the players showed composure, dedication and team spirit.

The girls suffered their first loss of the season, 87-83, to La Jolla. They bounced back against Coronado and won by a score of 95-75. The girls improved their record to 6-1 on the season. The boys also lost to La Jolla 91-78. Against Coronado, the boys had one of the most dominant meets of the year, winning 129-35 and improving their record to 5-2.

There are only two meets left in the season: City Conference and CIF Championship. Both the girls' and boys' teams look to have impressive results in both. The City Conference meet starts Tuesday, April 26 at La Jolla High School and the finals are on April 29. CIF starts on May 4 at Granite Hills High School and continues through that week.

Both the girls and boys have a great chance of winning CIF. This has been a highly successful season led by a great senior class and head coach Jim Jordan.

Let’s fill the stands for the next two meets and support this team in their pursuit of a CIF Championship!

On April 12, senior Hunter "The Prez" Kates twirled a complete-game no hitter against Imperial High. He was at the top of his game, striking out 12 and walking none in what would have been a perfect game, had it not been for an early error by the Knights defense.

For Kates, it was another excellent start, delivering a clutch performance to get the Knights back in the win column. Offensively, freshman Henry Armstrong and senior Rhett LaRocca doubled, while Julian Tang '22 and Jake Molinar '23 each singled.

On April 14, the Knights traveled to Mira Mesa and played in one of the most exciting games of the year.

The game was an eight-inning affair that ended in a heartbreaking walk-off loss on a throwing error.

The star of the game for the Knights was Henry. He got his first start of the year on the mound and was terrific, striking out six in six innings and only allowing four hits and two runs.

Against San Dieguito, the Knights fell in five sets and lost the fifth 18-20.

During the match, the Knights got great contributions from seniors Sam Gal, Nicky Clotfelter and Cristian Casillas, and sophomore Spencer Ralph.

For the San Marcos match, the Knights invited Bishop's faculty for a teacher appreciation match. During the match, teachers were recognized and the Knights played very competitively against the fourth-ranked team in San Diego County. Although the Knights were swept, sets two and three were two-point games.

For the match, the Knights got great contributions from seniors Ryland Birchmeier and Logan Howard, and junior Greyson Goldberg.

"We are right on the verge of greatness," says Greyson. "All of our matches have been extremely close. The key is for us to continue to trust the process, get some of our starters healthy and be ready to make a run in the CIF playoffs."